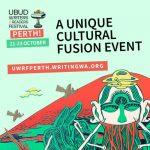 Since its foundation in 2004, the Ubud Writers & Readers Festival (UWRF) has evolved into Indonesia’s leading platform for showcasing its writers, artists and diverse Indigenous cultures. Under the direction of Janet DeNeefe, UWRF has also grown into one of the world’s most celebrated literary events – an annual pilgrimage for lovers of literature and conversation.

Writing WA’s relationship with Janet DeNeefe and UWRF now spans more than a decade. During this period Writing WA has sponsored more than 30 WA writers and illustrators to travel to Bali to participate in this prestigious festival.

More recently Writing WA joined hands with our friends at the Ubud Writers & Readers Festival to bring an authentic experience of the Festival to Perth. In an exclusive partnership between our two organisations, the inaugural Ubud Writers and Readers Festival Perth was presented October 2021 and it returned again in 2022. UWRF Perth 2022 is enabled with investment from the Federal Government through the Department of Foreign Affairs and Trade and from Lotterywest.

News from the Festival 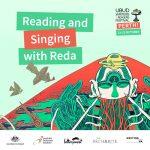 I am so glad I attended this event. I listened to exerpts from two of Ibu Reda’s books and learned a new lullaby and two poems-turned-into-songs. (See links below.) The adults and children in the audience all joined in singing, whether the songs were old favourites or learned just today. A warm, friendly learning experience with Ibu Reda. Terima kasih Ibu.            Moya McLauchlan 22 October 2022

Reda Gaudiamo was born in Surabaya, East Java, in 1962 and currently lives in Jakarta. She writes short stories and novels such as Na Willa (2018) and Tentang Kita (About Us, 2015) for young adults.  Read was the chief editor of Cosmopolitan Indonesia and a publisher of several international lifestyle magazines in Indonesia. She has won several awards for her short fiction and novels, among others, from Gadis and Femina magazine.

Reda is also known as a musician and singer. For more than 30 years, she performed as a duo with her artistic partner, the late Ari Malibu, creating musical interpretations of poems. Watch Ari Reda perform Gadis Kecil and Aku Ingin, both being poems by Sapardi Djoko Damono