Why Indonesian Matters in Our Schools

A Rationale for Indonesian Language and Studies in Australian Schools. 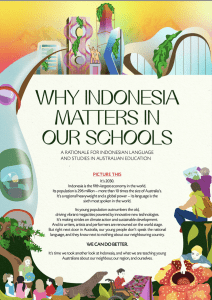 Picture this – It’s 2030. Indonesia is the fifth-largest economy in the world. Its population is 296 million – more than 10 times the size of Australia’s. It is a regional heavyweight and a global power, and its language is the sixth most spoken in the world.
But right next door in Australia, our young people don’t speak the language, and they know next to nothing about our neighbouring country.

It’s time we took another look at Indonesia, and what we are teaching young Australians about our neighbour, our region, and ourselves.
Building knowledge of Indonesia and an ongoing friendship with our neighbour into the next generation starts at school. Let’s picture a better future for Australia and Indonesia.
One where our young people know each other and have a deeper understanding about who – and where – they are.
There is so much we can learn and do together – teaching Indonesian and studies of Indonesia in our schools is just the beginning.

Why Indonesia Matters in Our Schools